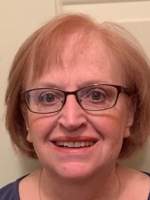 Ginny has been married to Jerry for 41 years and they have four adult children, one grandchild and one son-in-law.  Ginny was raised in a very dysfunctional family, the youngest of four children. She received her bachelor’s degree in English and French (lived in France for one year) and a master’s degree in counseling from UW Oshkosh. She and her husband also invest in real estate, doing house flips and owning rental properties. In her free time she enjoys cooking (always looking for new Keto recipes), family time, working on houses, gardening and reading. She accepted Christ as a child during a lent service at her church but didn’t begin to grow much in her relationship with him until in college she was introduced to Him again through a classmate who was involved with Campus Crusade for Christ. She truly appreciates the discipleship she received through her years with that organization, now known as CRU.  The Holy Spirit led her through many layers of healing from her childhood traumas. She attended her first Women’s prayer summit the first time it was offered in 2000 and became a part of the servant-leader team a few years later. God continues to heal and grow her and has used the prayer summits to fast forward the healing process.  She feels unworthy to be a part of this godly team and is still a work in progress.